Training begins at Shaolin TempleAugust 27th, 2012
It has finally come. 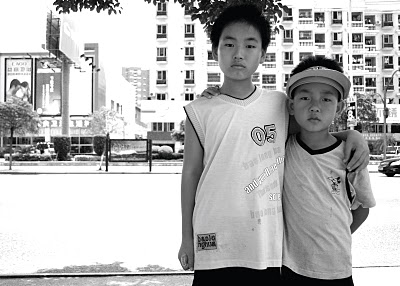 No, this is not an article about homosexuality in China.

This is a story about bros and sis, you know, those people who didn’t come from the mother as you, but somehow they just understand you so well and love you so much, that if they were to be gone you won’t want to be alive in a world without them. This is an article about those people.

After spending most of my free time observing and being a part of different schools in China, I have come to meet an interesting observation. In China, kids from the ages of elementary to high school often hangout and associate the most with kids of the same gender, this doesn’t mean that boys don’t play with girls or vise versa. It’s more that when they are free from the confines of class (when they have their own free will of choice), that these kids tend to play with kids of their same gender. You will see groups of boys all with their hands around each other walking down the street and you can see large groups of girls all holding hands walking around town as if they were like the cheetah-girls reincarnate, and this occurs very often in age groups that go up as high as 19. It is definitely not a common sight to see a young boy and a girl holding hands in public or walking together after school, the ones you do see are probably 20 or older (they just look young). It is only when one goes to college, do one observe more co-ed associations outside of class and required activities. As if all the influence of the parent’s nagging of “focus on school” and “study more” all go deaf to  these Chinese kids when they attend college at the age of 19 (national avg.), unless you are a momma’s boy, which is a popular choice among the current generation.

Contrast this to western kids, I do see more co-ed involvement starting as early as elementary school activities and developing into more social interactions between kids of different genders in middle school aka those “first crushes” or promotional dances, then materializing into actual relationships with events like prom and other little things in high school. The same cannot be said of Chinese student, where small tests in elementary schools develop same-gender study group, and bigger tests in middle school creates even stronger bonds with the same kids you studied with in elementary school, eventually materializing in huge tests in high school(where the scores will determine where you go in life) ,  this is also when students just get so into studying that they ignore human interactions in general. Ok, that might be slightly exaggerated.

But the point is the cultural difference between the seemingly more “free” and “open” West and the supposedly more “strict” and “controlled” East can be observed in the frequency of same-sex closeness and the age groups in which they occur. It’s much more interesting to see the phenomenal in person than to read about it from my choppy non-edited writing. So next time, instead of people watching in Starbucks, you should go people watching at schools, in China, and look at the same-sex closeness that would probably not occur in the US or other western societies.

But as usual, I might be wrong, about this whole thing.